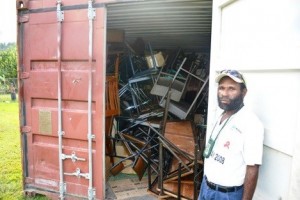 Toowong RC’s International stalwart Reg Collard reports that our Donations In Kind (DIK) container has safely arrived at Bulolo.
The container was filled with beds, mattresses and bed linen for the Bulolo Hospital, as well as Teacher and student desks and chairs, 22 computers for schools (from the  Nundah RC’s Computers for Kids Project) , 121 tarpaulins for emergency shelter at the Care Centre in Bulolo (purchased at wholesale through Anna Lehmann’s hardware shop), wheel chairs, crutches, walking frames, birthing kits. The container will be used for storage.

Two beds had been previously unloaded in Lae, to be sent separately to Kundiawa Hospital for quadriplegic patients. This was an area where club member Murray Bladwell was a teacher.

This project arose after D9600 advised that it had extra funds for district grants. It demonstrates the level of co-ordination, co-operation and value-adding that many Rotarian volunteers working together can achieve.
For an expenditure of $18,100, donated goods valued over $30,000 were finally delivered.
Toowong RC agreed to provide $6,000 and asked D9600 for an additional $3,000 as a District Grant (to supply water tanks and tarpaulins for emergency shelter). In the end we had to purchase the  tarps in Brisbane and freight them on to PNG. The project grew from there as we set out to fill a container to transport them! 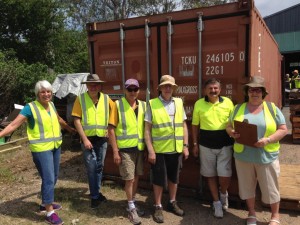 All hands on deck to load the container

A further story…
As DIK were not sending Containers through to Lae at the time (that’s another story!) the Toowong RC had to commit to pay for a container.
In doing so, we had to do following: